Haven in the city’s heart 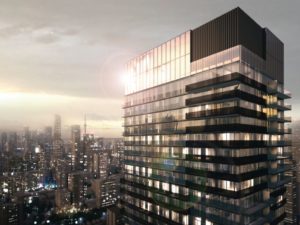 Striking and modern, with an orderly march of zigzag balconies up its dark moody façade, the newly launched 55C condo on 55 Charles St. E. is all about design.

That’s thanks to the team MOD Developments pulled together, including Peter Clewes of architectsAlliance, interior designers Cecconi Simone and landscape architect Janet Rosenberg. The condos are meant to be innovative, just like the developer’s award-winning Massey Tower, at Yonge and Dundas, and Waterworks, in the King West entertainment district.

55C, just southeast of Yonge and Bloor, will offer 100 rental units on the first five floors, and 551 units in the tower above. The condo suites range from 335 square feet to 1,000-plus sq. ft., in studio, one bedroom, one plus den, two bedroom, and three bedroom configurations and will start in the $500,000 range.

Potential buyers will get a chance to see exactly what a 530 sq. ft. model suite looks like when the sales centre opens later this year. The suite demonstrates “how well you can live in a small space,” says designer Anna Simone. “It’s a jewel box, and a sanctuary in the heart of downtown Toronto. With life this busy, you need a place to retreat to and unwind.”

Starting with the lobby and the amenity spaces, and carried through to every suite, the esthetic is Japanese — subdued and restful. With shelving, storage and even low seating crafted of warm, pale wood and designed on a horizontal plane, the spaces feel both compressed and voluminous. Nine-foot suite ceilings are generous, while 18-foot ceilings in the party rooms on the top floor are extravagant. 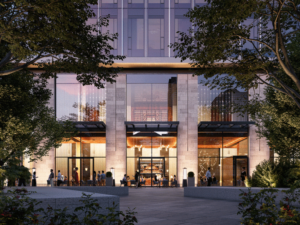 The vibe was a natural fit, Simone says, noting she took her firm to Japan shortly before starting on the design of 55C. The trip opened her eyes again “to the possibilities of living well with minimal space and belongings,” she says.

“It’s not about the square footage but how you use it. Even the way the Japanese use their public areas, a living and dining space is common area by day, and by night, it’s for sleeping. This is quite easy to accomplish when the space is beautifully done.”

Designing function into small spaces is easier if you think about “how meticulously designed yachts or exclusive train cabins are, and then applying the same principles to a high-rise suite,” Simone says. “Selecting high quality materials and finishes, being very thoughtful with every square inch, so that everything is in reach, there’s no waste, no clutter.”

It’s a concept she’s applying to 55C. For example, some of the condos have a bathroom vanity that takes up one whole wall, with double sinks separated by two-sided shelving that reaches the ceiling and provides shallow storage for everyday essentials. And the kitchen features a custom banquette for dining seating, a movable kitchen table, built-in shelving, pantry units, and integrated stainless Panasonic appliances — a 24-inch fridge and oven, induction cooktop, microwave, and dishwasher.

The lobby, too, has tall, wood shelving, which is integrated into the wall behind the concierge desk, itself made of vertical wood slats. The overall effect is a subtle graphic artwork.

This underplayed graphic theme starts with the building’s exterior, however. Up close the cladding is subtle and orderly — alternating blocks of balconies — but on the skyline, it really stands out. That’s an intentional play.

As Gary Switzer, MOD’s chief executive officer, points out, it’s important to build something that works “within the context of a neighbourhood.” And he wants to develop projects that enhance local areas.

That also means offering attractive amenities. At 55C, they’re spread between the eighth floor of the podium and the top-floor penthouse level.

The podium has 10,000 square feet of lounges, private dining rooms, kitchens and bars, plus an extensive roof garden designed by Janet Rosenberg. This is also where the fitness facility is — designed by Benchmark Group gym specialists, with steam rooms, movement and yoga studios, a place to do boxing, cycling, weights and cardio machines.

And there’s more on the 49th floor — indoor lounges, a party room with double height ceilings, a kitchen, an outdoor lounge with fire pits and BBQs, and a lush green roof. This is where residents will get panoramic views of the city.

On the ground floor, there’s a pet spa, parcel storage, 24-hour concierge, and below that four levels of underground parking, lockers and bike storage.
Since 55C replaces two smaller rental buildings, city policy stipulates that the developer must offer the same number of rental suites. They’ll be available closer to the time of occupancy.

“Given the issues of affordability and the lack of rental in Toronto, the city is absolutely right on that policy,” Switzer says. “From what I’ve seen tenants and purchasers downtown are the same — and we designed the building to accommodate all accordingly.” 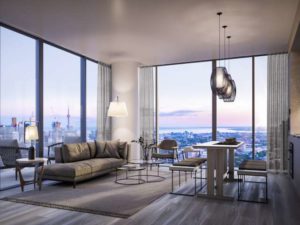 The interior design is being done by Cecconi Simone. Supplied

1) Green space galore: Allan Gardens, one of Toronto’s oldest parks, with a beautiful Victorian greenhouse, playground and fenced off-leash areas for dogs, is a few blocks away at Jarvis and Carlton; Riverdale Park and farm is a little farther east at Carlton and Sumach; Queen’s Park is five minutes in the other direction; and the Rosedale Ravine and Ramsden Park are 15 minutes to the north.

2) Food, glorious food: Grocery stores are now plentiful in the area – Longo’s Market is two blocks away. And Eataly, the international Italian food emporium, will be opening later this year in the Manulife Centre, which is about a five-minute walk away. It will offer fresh, seasonal fruit, veg, and fish in a traditional style Italian food market. Eataly will also have restaurants in it, so people can shop and dine in one convenient place.

3) Cultural pursuits: The Royal Ontario Museum, Gardiner Museum, and the Toronto Reference Library are all about a 10-15 minute walk away. And the AGO, with its 90,000 works of art and constantly changing new exhibits, is a quick subway ride away.